The 21st edition of the Tribal Jewelry & Textiles Fair in 2023

The 21st edition of the Tribal Jewelry & Textiles Fair will be held on either the 23rd and 24th September or on the weekend of the 30th September and the 1st of October.

Information on the lectures and activities during the 20th edition of 2022: 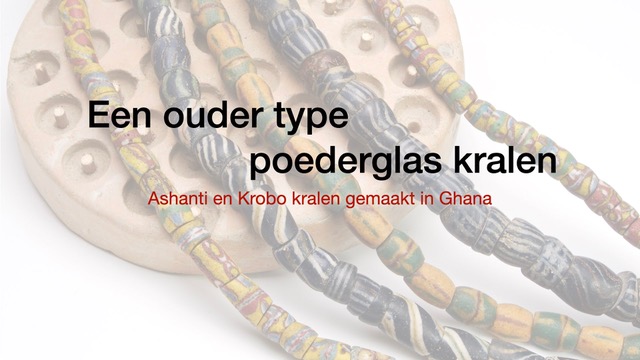 During the edition of this year, bead-collector Hans van der Storm will present a lecture on the subject of "An older type of powderglass beads. Ashanti and Krobo beads made in Ghana".

On this lecture; In the last few hundred years, craftsmen, especially in Ghana, have been experimenting with different techniques to produce a variety of these powderglass beads. Finely ground-up glass of different colours was used, mostly glass of European origin. Hans van der Storm will elaborate on this theme of producing powderglass beads, and will present an small exhibition of collected powderglass beads from the first half of the 19th century.

This lecture will be presented in the cloakroom of the church in the afternoon of Saturday and Sunday. The exhibition can be inspected in the main hall of the church.

For the edition of 2022 the upper galleries will be designed by the staff of the Métier magazin as a interesting place to listen to lectures and visit exhibitions, relating to the items presented on the lower floor.

For the edition of 2022 the main theme of the lectures will focus on the legendary Silk Road. For a list of lectures and their subject see below; 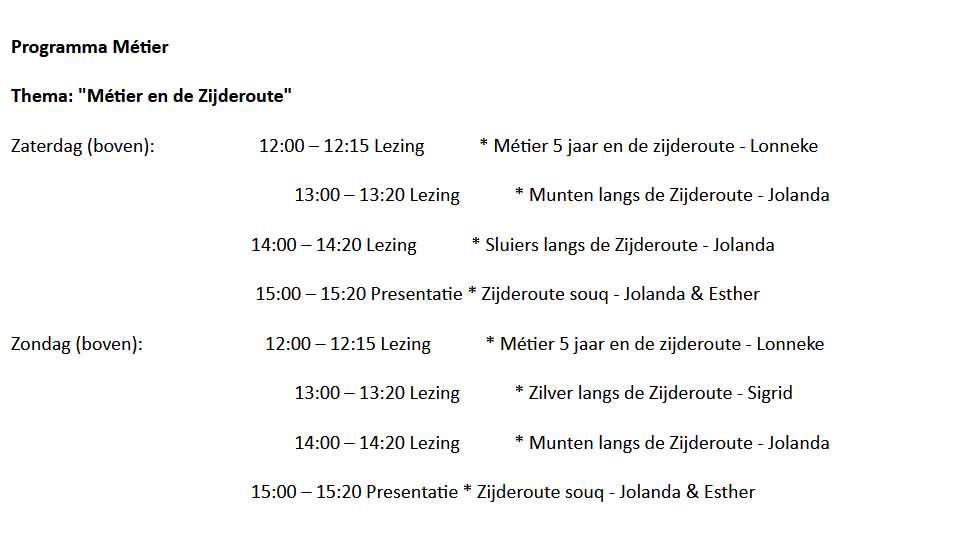 On the left uppergallery a continuous photographic selection will be projected of the photographer Benno Neeleman. This presentation will provide an insight in the diverse subjects and categories, which inspire this photographer from Nijmegen.      Info; www.bennoneeleman.com

Jolanda Bos gives a lecture on her new book: "Paint it, Black, a biography or kohl containers

People have been decorating their bodies for thousands of years and all over the world. Of all the possible techniques, decorating the face and eyes is common in all cultures. Both men and women often use kohl, a black powdery substance in various compositions, to decorate the eyes. Kohl is often applied around the eyes as a dark outline. But kohl was not only applied as decoration, it was also used to keep away evil or to accompany ritual festivals. Because of the important role this material has played, it has been stored throughout history in specially made containers. 'Paint it, Black' deals with the remarkable history of kohl containers from the early Bronze Age to the present. Jolanda describes the kohl containers from ancient Egypt, Persia, early Islamic culture and the contemporary cultures of North Africa and West Asia. The book also contains a catalogue of the unique collection of kohl containers in the Wearable Heritage collection.

A short introduction of the exhibition tob e given at de Duif, second floor of the building.

At the gallery in de Duif a modest exhibition will be presented. Subject is 'Second Life Beads'.

In Africa it is common practice that broken beads are not disposed of, but reshaped in an way that they can be used as fresh beads again. At the fair of 2019 Hans van der Storm will present many examples of this kind of beads, taken out of his own collection.

Sometimes life can be so disappointing that people in Egypt believe that all bad luck is caused because one is possessed by a spirit. To cope with that that situation, a ritual called ‘zär’ is performed. In the zär the wishes of the spirit are met, hoping that it stops bothering you. Silver jewelry played an important role in the ritual. These jewels are no longer used, but are collected and sometimes are part of ethnographic museum collections. Especially the silver pendants with pictures of spirits are very popular and well-known, but there are many more jewelry that were used in the zär. If you look really closely, you will even discover part of Egyptian society from roughly half a century to a whole century ago. By studying this jewelry, we learn more about how Egyptian women experienced the world around them. Sigrid van Roode informs us about her research into this special jewelry and shows you how jewelry can unlock the world behind the objects.

Métier is an originally designed magazine with quality articles and beautiful photos that focuses on art, design, craft, material and technology. The starting point can be a historical or contemporary perspective, usually it is a combination of both. In addition, it deals with interesting interfaces between the various disciplines. The balance between diverse cultures and their expressions is guaranteed by careful collaboration with international authors and scientists.

After the introduction by Boukje Mulder, Sigrid van Roode will show the broad scope of Métier on basis of a number of topics that will certainly interest visitors to the exhibition.

Hans van der Storm, same program as the day before.

In recent years, more and more Western fashion brands, such as the French couture house Dior and the Dutch Afriek, have brought clothing made from colourful wax print fabrics to the market. Waxprint, also known in Africa as ‘le wax’, pagne or kitenge, is considered a symbol of the African continent and African clothing culture in the western world. But how African is this material anyway? In this lecture Nora Veerman (MA Fashion Studies, University of Stockholm) talks about the history of wax print fabrics and demonstrates how these are inextricably linked to local pride and traditions as well as the globalization of culture and economy. In addition, she discusses the effects of the worldwide spread of wax print fabrics on the western image of Africa.

There are no images in the gallery.