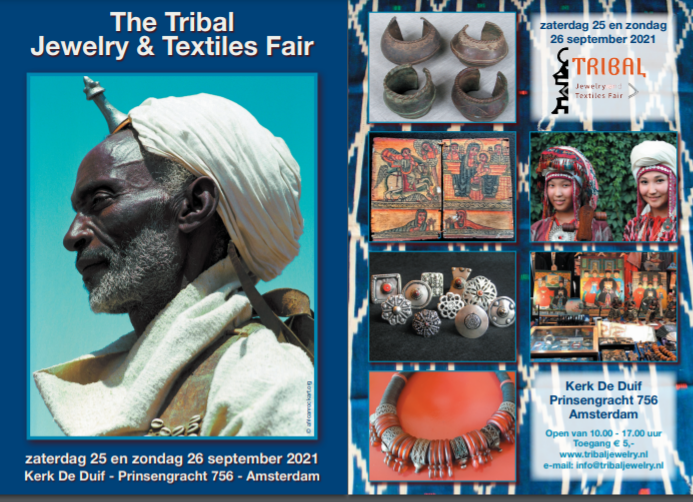 Tine Withagen was the initiator and organizer of the Amsterdam Traditional Jewelry & Textiles Fair (ATJTF), which was held every year on the last Sunday of September in the church "de Duif", Prinsengracht 756, Amsterdam. At then costume jewelry and Dutch traditional textiles were prominent. Non-Western items were then not a majority. Over a period of 16 years,though, she has succeeded in expanding the fair into a monument for anyone interested in 'tribal jewelry and textiles'. All experts and lovers of beautiful beads, jewelry and valuable old textiles from Africa, Asia and Latin America found their way to “de Duif” annually, especially because of the inspiring way Tine organized this event.

Because the organization took a lot of work and energy, Tine has decided to transfer the organisation of the fair to Paul Spijker and Jan Aarnout Boer, starting  with the 2016 fair. Paul Spijker is also the owner of the GalleryToguna  in Amersfoort, where, besides  traditional jewelry, African art is being sold. Paul has been on the stand since the start of the ATJTF. Jan Aarnout Boer is married with Pieternel de Hoogh, who is also a well-known participant in the fair.Paul and Jan Aarnout took care of the exhibition since mid 2016. The edition of 2016 was very successful, so it was decided to enlarge the fair in 2017 into a two-day event.

Since 2020 Paul Spijker has become the sole organisator of the fair. His aim is to enhance the character of the fair, now renamed into the Tribal Jewelry & Textiles Fair, as a flashpoint of collectors and sellers of non-Western jewelry and textiles. To this aim lectures are given by specialists to interested visitors of the fair. Furthermore small expositions are presented as are organisations, with an affiliation to the Fair.